As the debate rages on between genre and literary fiction, I am always fascinated whenever the two converge. I am particularly excited about a new literary novel coming out, Neruda on the Park, by debut author Cleyvis Natera. As an AfroLatina author whose work in crime fiction takes on gentrification and women of color vigilante justice, I was excited to interview Cleyvis about how she deals with some of those themes in her book by her. Here’s our conversation:

Aya de Leon: Although Neruda on the Park is positioned as a literary novel—and the writing definitely has all the beauty we could ask for in literary fiction—I also see it as a crime novel. Especially because it sort of opens with a murder, the killing of the tenements in Nothar Park. Did you think of it in that way?

Cleyvis Natera: As an immigrant who has lived in this country for over thirty years, I often envision a world where borders don’t exist. Likewise, in my own writing, I’m invested in erasing the strict boundaries that exist between genres—borders that are useful only for marketing or sales purposes. Die-hard readers enjoy books that can accomplish many things at once. I loved reading thrillers and crime novels as a teen—Ann Rice and Stephen King were among the authors I devoured—so when I thought of the books I wanted to write, I knew I wanted to imbue within my literaty novel the propulsion you can only find in a crime or thriller. I admire plot engines that make it impossible to put a book down.

AdL: The second thing that the novel does is set up a mystery–about Luz and her job–although it solves that mystery rather

quickly, at least on the surface. The setup with the law firm was either well-researched or your were writing what you know. Have you worked in that type of corporate law environment in New York?

NC: I worked a corporate job for two decades. That included the entire time I wrote Neruda on the Park. Although my job was in insurance, most of my colleagues were attorneys and the role I held for the last five years focused on Lawyer’s Professional Liability. That is to say, I’m very familiar with the law environment in NYC. I was also fortunate that I have several close friends who are attorneys, and one of them read an early version of my novel and provided feedback about Luz’s work environment de ella. 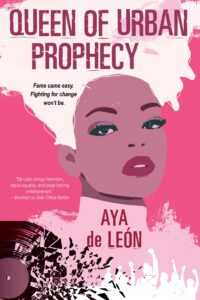 AdL: I have also written stories about Black women in their 20s who are on the brink of winning the American Dream and then having it all slip away. my heist novel, The Accidental Mistress has a protagonist from Trinidad, and A Spy in the Struggle has an African American protagonist. Both go to Harvard and think that their hard work is about to pay off. For both of them, there’s something about their Blackness that they are trying to outrun or out-achieve. As an AfroLatina, Luz’s own ambivalence about her de ella Blackness de ella comes up on the very first page of the novel. How do you see this book in traditions of AfroLatine writing or current conversations on Blackness and Latinidad?

NC: This novel is about a family and a neighborhood under threat. When an old, burnt-out tenement building is demolished to make room for luxury condos, it is a catalyst that sets the novel into motion. I wanted to show the ways in which Black immigrants, especially those of us who don’t speak English as a first language, are constantly under threat. There is violence that permeates the history of Dominicans in NYC, as exhibited by the reference to Jose “Kiko” Garcia in the early pages of my novel. This young man who was killed at the hands of Police Office Michael O’Keefe in New York City back in 1992. We’ve often been assumed to be criminals, just for walking down the street and wrapping a jacket around our waist (which is what O’Keefe claimed as the reason he believed “Kiko” was concealing a weapon and led to the pursuit that cost him his life). Luz is very comfortable with her Blackness; she finds her body de ella a source of joy. But she’s aware of the sources within her community of her and outside of it that insist her of her Blackness of her should be a source of concern and worry. One of my aims is in centering the Blackness of this entire neighborhood within the context of an immigrant community and to be unapologetic about it. I’d like to celebrate the beauty and strength inherent in people who look like me and push against the constant ways in which we are disappeared in accounts of what it means to be Latine.

AdL: Like your characters, you were born in the Dominican Republic and grew up in NYC. Are there particular strains of the novel that are autobiographical?

NC: For sure! I grew up in New York City from the 90’s on, a time of brutal changes for Black and Brown communities as gentrification thrust its tentacles through every borough. There was a great deal of fear in my community, as some landlords pushed people out of their apartments to make room for those willing to pay higher rents. The fear and rage were visceral, in many ways, continued to be. When I returned from college, everything was changing at a rate that seemed absolutely unbelievable and I saw how people dug their heels in, fought back to keep their homes. That’s where the inspiration for Eusebia came from. Mother to Luz and wife to police officer Vladimir, Eusebia has loved and cared for everyone in this community. She hatches a scheme to scare rich and mostly white people into thinking the neighborhood is too dangerous for them to live in. The seed of the idea is one of love, of the need for survival, but very quickly, her own trauma from her gets in the way, and everything spirals out of control.

AdL: I’ve never lived in New York and occasionally people use names for neighborhoods I’ve never heard before. I had to look Nothar Park up to see if it was real or fictional. What pushed you to create a fictional neighborhood?

NC: I wanted Nothar Park to encapsulate so much of what I love of my time living in New York City. I combined neighborhoods where I’ve lived—from my Abuelita’s apartment building on 144th street (600 West is where Luz and her family live) to the Brownstones in Harlem I lusted after in my twenties, to the Jackie Robinson Park I gazed at from my apartment window during the early drafts of this novel. I wanted to combine it all. I also wanted to root Nothar Park in a legacy of women and Black activists in NYC, so it was also important that the fictional history of this neighborhood be African American and that when this Black Immigrant community moves in, they are inheriting both the joys and the struggles of what it means to be part of the Black diaspora in the United States.

AdL: Although the novel opens via Luz’s perspective, Eusebia becomes the vigilante. It’s a really interesting choice, given how Luz is raised in New York and Eusebia is the generation that immigrated and is positioned as more traditional. But she defies some of those expectations. What prompted you to have her break out of her in that way?

NC: Eusebia and Luz immigrated to New York City when Luz was nine years old. When we meet them, both these women are deeply rooted in Nothar Park, their new community. I wanted to make it clear this story is a counter-narrative to the dangerous assumption people make in this country about who gets to be American. Immigrants are often rejected from the definition because we are thought of as temporary people – we’re just passing through, earning a bit of money, and then expected to be yearning to head back to our birthplaces. But that isn’t true for most immigrants in my experience. We consider the United States our home. We’ve earned the right to claim it through our hard work and sacrifice. We don’t need to be grateful, or to feel as if we’re guests who have overstayed our welcome. There are several times during the book when characters utter the words, “This is our house.” Having both my characters, especially Eusebia, be willing to do anything to save her home from her is also a way of demanding an expansion of what it means to be American as far as who gets to claim this land as home.

AdL: I love this, and I love the way it shifts Eusebia’s criminality into the imperative of protecting her home and her loved ones. Did you consciously study any crime fiction or decide to invite influences from any crime fiction lineages or traditions?

NC: I’ve been a fan of crime books since the time I read thrillers and crime books as a teen. What I admire most about the genre is that convention dictates we go from the murder of an innocent person (in my book, we have both the neighborhood under the threat of death as well as a young boy who has been attacked, and the words Go Home have been into his back). Though I didn’t adhere to all conventions, it was important to honor the most critical aspects of crime fiction, which for me is a propulsive plot that forces you to turn the page to find out how it’ll all unfold.

AdL: As a writer of New York City novels, issues of displacement, gentrification and erosion of communities of color are also in my work. My heist series is really about stealing as vigilante justice and radical wealth redistribution. I think the books are a sort of revenge fantasy that I’m too timid (and incompetent) to consider in real life. Do you have any secret vigilante fantasies of your own?

NC: When I was a young woman, I used to feel unexpected bursts of rage when I thought about the difficulty of surviving in this country as an immigrant, especially for those of us with Black or Brown skin. I have a pronounced accent when I speak, and even after over three decades of living here and speaking English, it is the first thing people notice. I am often asked where I’m from, and anything other than my place of birth has been deemed an unsatisfying answer. My novel is in response to what I see as the ultimate claiming of our right to be here and so, much like you, I see it as a way of working out this secret fantasy of fighting tooth and nail for our homes, regardless of the consequences.

AdL: This is your debut novel, what’s up next for you?

NC: For the first time in my life, I’m focused on full and blissful enjoyment of this book without thinking about what’s next. It’s been such a long journey—fifteen years total—that I am fighting my own instincts to rush to the next thing. What a joy it is to celebrate this beautiful book being out in the world. 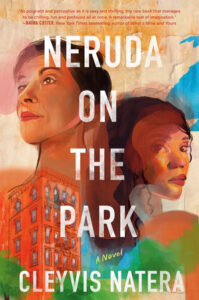