Something that I’ve always enjoyed about board games is that they have the ability to be adapted from practically anything. We’ve got board games based on concepts from Video Games, Movies, Books, and more. Disney Sorcerer’s Arena: Epic Alliances is my very first experience with a board game based on a mobile game though. How does a game fair as you pluck it out of a mobile device and put it on the table in front of you?

Disney Sorcerer’s Arena is a competitive 1v1 or 2v2 board game where players will all play the role of a Sorcerer, someone who is able to summon characters from various Disney worlds into combat with one another. With your army of Disney characters, you’ll have each character take a turn to move, attack, and use special skills to earn victory points and defeat your opponents.

Inside the box, players will find a large hexagonal gameboard, status tiles, and health rings as well as character-specific standing tokens, cards, and profile cards. In the Core Set, players will have access to Sorcerer’s Apprentice Mickey, Gaston, Maleficent, Aladdin, Ariel, Dr. Facilier, Demona, and Sulley. There’s a fantastic range of characters in here from popular staples like Gaston and Aladdin, to more recent characters like Dr. Facilier from Princess and the Frogall the way to deep cuts into Disney history with 1994’s gargoyles TV shows.

It’s extremely impressive just how well this board game translates the world of the mobile game into a tabletop experience. Each character has their own initiative that determines which order they go in, their character tokens being laid out to represent initiative order as you’d see on the screen. Each of the cards that you can draw for a character has a direct counterpart in the video game world. The biggest difference is in the legacy aspect of the mobile game where you can slowly strengthen each of your characters by spending resources on them. As each game begins anew with the board game there is still the ability to upgrade a character but the most that will normally net you is one additional ability. While it’s not 1:1 it’s certainly impressive just how much they’ve been able to translate one to another. 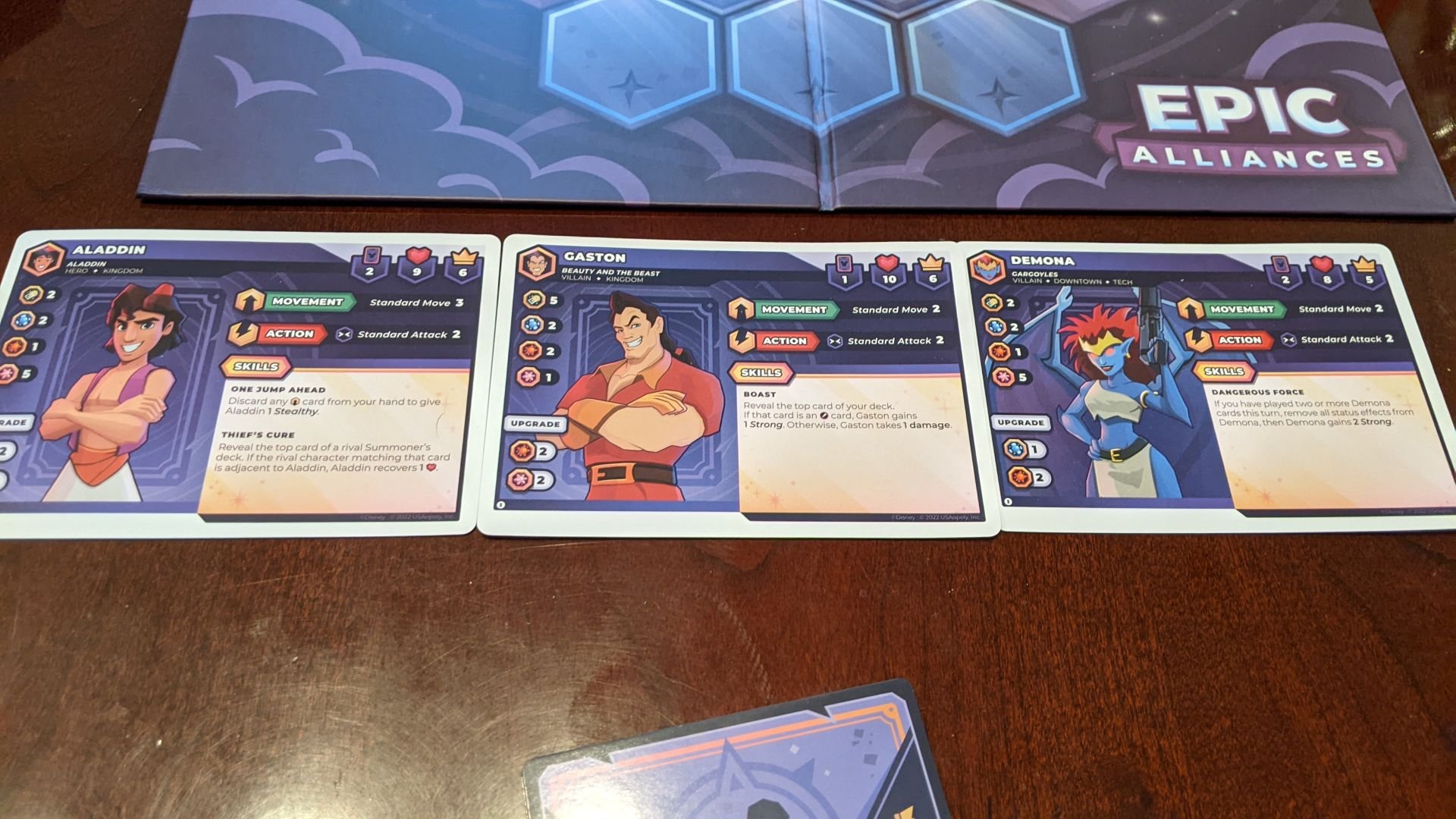 Each character has a very unique way of playing once you get into the expanded rules Gaston has a high health value and a few abilities that allow him to push other characters around, this coupled with abilities that deal more damage when an opponent has no ally nearby you’ll be aiming to corner your opponents when their friends aren’t looking. Alternatively Maleficent is a glass cannon, one of the lowest max HPs in the game but she is able to target multiple enemies in range. Putting a wall of allies between her and her enemies is smart, but if you leave her alone she’s an easy target.

When each side might have anywhere from 2 to 4 characters the different combinations that you can begin to create between all of the playable characters are a lot of fun. Planning to cover weak characters with tanks, or using characters with special abilities that immobilize your enemies while you dance around them. Even if you aren’t a fan of that character in general, it’s definitely worth taking time to understand what role their archetype is built to play.

The game does a fantastic job of teaching you how to play the game. Broken up into four different “chapters” in the instruction manual. Chapter One holds your hand completely recommends the game be two characters per side, and tells you which characters to pick, and which abilities you should lay out on the table. It teaches you everything you need to know about the cards in your hand and how to navigate the board and do battle. With each incremental Chapter, new elements will be added to the game, highlighted in the instruction booklet as highlighted text. By the time you’ve read and understood playing through Chapter 4, you’ll be an expert in the game and Chapter 4 will be your “complete” instructions going forward.

This method of teaching the game is incredible, not only does it allow you to understand each aspect of the game without throwing every single mechanic at you but it also created different tiers of understanding in the game. For younger players who just want to move the Disney characters and make them fight you can do that very easily right out of the box. Using the full ruleset characters can have unique movement and damage values, skills unique to their character, and the ability to upgrade and unlock further skills. Even gameplay elements like the maximum size of a player’s hand can be altered depending on which character you’ve selected in your team.

The main downside of this teaching method is when it comes to playing as an adult, with so many unique mechanics that can be unlocked as characters get access to more abilities and unique statistics the earlier chapters of learning can be a bit slow. Expect it to take a while if you’re learning it step by step to really get to the good part.

On top of the Core Set, that’s already available TheOP is also just about to release their Turning the Tide expansion that we were able to take a look at. This first expansion adds Davy Jones, Experiment 626 Stitch, and Moana to the roster. Each of these characters brings with them a unique mechanic that will further enhance the game such as Moana’s ability to place Ocean tiles that can deal AOE damage like mines around the board, or Stitch whose action cards have different effects whether his current health is odd or even.

Davy Jones stands out to me as a truly unique character in that his abilities are all related to inflicting the Cursed status on himself, his friends, and his enemies. He can even resurrect a fallen ally during his turn from him. These Cursed characters can then heal Davy Jones as they deal damage to others, or Davy Jones can deal damage to all Cursed rivals at once. Davy himself will always be cursed to some extent, but he will be able to control the table by infecting as many others as possible. There are some truly unique mechanics across these characters. While the core game doesn’t change, with three new characters with increasingly game-altering abilities it’s amazing just how much it can shift the way you play.

What are our final thoughts on Disney Sorcerer’s Arena: Epic Alliances?

TheOP has managed to create a game that on the surface is filled to the brim with colorful Disney characters, and introduces the game to players in easy steps. But at its core there’s a surprisingly deep strategy to the archetypes that each of these Disney characters take on and how you can combine together their differing playstyles to create proficient teams. While it will take a few games to really get into the swing of gameplay once you’ve figured out all of the abilities and mechanics the Disney of it almost feels stripped away as you’re planning how to one-up your opponent and claw your way to victory.

This game also caters fantastically to the smaller fans of the House of Mouse. With simplified turns, smaller-scale battles, and less to keep track of this game to scale whatever its intended audience is. This unique feature alone is likely going to make it a staple of a family board game night.

If you’re someone interested in a head-to-head tabletop strategic experience then this is likely going to be a game that you enjoy. Whether for little kids or adults there’s enough going on here to have a fun time playing. With the base character set alone, there’s an interesting enough variety of character archetypes to play as that have unique mechanics that it won’t grow old for a while.

For those less Disney-inclined it’s likely that seeing colorful characters like Sulley or Mickey might be a bit of a turn-off, but underneath the Technicolor figurines and flashy character cards the difference in the character play styles is nothing to scoff at. At the very least… if you’re interested in the idea of ​​the board game but aren’t sure if you want to bite the bullet or not then you can always try out the free-to-play mobile game to get a bit of an idea what the gameplay is like?

Disney Sorcerer’s Arena: Epic Alliances Core Set and Turning the Tide Expansion used in the creation of this review were provided by Wizkids.