[Stay on top of transportation news: Get TTNews in your inbox.]

New developments in fleet monitoring and telecommunications during the past few decades have significantly altered how fleets track and manage their drivers and mobile assets.

And looking ahead, further advances in telecommunications, data analytics and artificial intelligence, combined with the emergence of autonomous and electric-powered trucks, will likely feed additional innovation and growth of the Internet of Things and connected trucks and trailers in the next decade, industry experts said.

Telematics in the trucking industry began with Qualcomm Inc.’s introduction of the original OmniTracs system in 1988, said Clem Driscoll, founder and principal of research and consulting firm CJ Driscoll and Associates.

In the decades since, the field of trucking telematics has blossomed into a competitive market with many more technology suppliers entering the industry with their own products and services aimed at helping fleets operate more safely and efficiently.

In addition to telematics for tractors, a growing list of companies have introduced systems to track the location and status of trailers, intermodal containers and other assets.

A growing number of fleets also have adopted video telematics as a way to support driver coaching and provide liability protection.

Along the way, a long string of mergers and acquisitions among technology vendors has reshaped the business landscape in this expanding field.

Regulation also has spurred growth in trucking’s onboard technology market. The US Federal Motor Carrier Safety Administration’s electronic logging device mandate, which went into effect in December 2017, requires nearly all longhaul truckers to record their hours-of-service information via electronic logs rather than paper logbooks.

Driscoll said there are about 3 million over-the-road trucks equipped with e-log systems operating in the United States, a threefold increase in the past seven years.

“That hockey stick growth was due to the ELD mandate and now that’s also continued in Canada,” Driscoll added.

Driscoll’s firm recently released a comprehensive study on the US market for mobile resource management systems. The report concludes that there are about 18 million GPS/wireless devices used to monitor fleet vehicles and drivers, trailers, construction equipment and field service workers, and that number is expected to grow another 38% to 25 million units by 2024.

One fleet operator envisions the various forms of connected truck technology converging in the future.

I see [it] moving more toward an integrated system together bringing OEM technology, safety and driver performance monitoring without the requirement of multiple pieces of hardware,” said Amos Rogan, less-than-truckload operations leader for productivity and efficiency at Averitt Express.

Averitt has implemented a digital workflow application to handle shipment management, driver performance monitoring and communications for its fleet of 5,000 trucks and 15,000 trailers. That application incorporates hours-of-service monitoring and trailer tracking capabilities.

Cookeville, Tenn.-based Averitt ranks No. 32 on the Transport Topics Top 100 list of the largest for-hire carriers in North America.

Driscoll also believes the advent of electric-powered trucks will drive changes as the trucks will require more careful route planning that takes into consideration the location of charging stations and battery capacity.

Ultimately, Driscoll sees autonomous trucks as being the next big change for the trucking industry. Though he believes that change will come slowly.

“There’s a population that has to get comfortable with seeing a truck that doesn’t have anybody behind the wheel,” Driscoll said. “That’s going to take some time.”

Louis Rosenberg, founder and CEO of artificial intelligence firm Unanimous AI, sees the momentum for autonomous trucking accelerating much faster in the next few years despite some initial reservations among the motoring public.

“As for the social barriers to acceptance, I believe consumers will rapidly become accustomed to this technology once they see large trucks driving safely on the highway,” he said. “But it will surely make people nervous at first.”

Deryk Powell, president of technology deployment company Velociti, also believes the future of transportation is a smart, connected and increasingly autonomous and electric environment. Velociti helps fleets integrate various technology solutions by planning out how those different systems can work together. 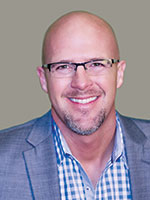 “We think a lot about what fleet maintenance will look like, what a dealership will look like,” Powell said. “Maintenance of a fleet, in general, when we’re talking about an autonomous, connected, electrified world, I think is going to be much more weighted toward local service. And the training technicians and expertise of those technicians are going to have to evolve. Technology is only great when it is working. And I think that’s a really big issue for the industry to figure out.”

Powell also believes smaller fleets will integrate more telematics systems into their operations in the future.

“I feel confident, just like any other technology, that that will trickle down into small and medium carriers, no different than the very early onboard computing in the ’90s,” he said. “I think there’s a keen desire for fleets to figure out how to make these systems work together.”

The Drive for Greater Efficiency

During the peak growing season from the end of July to the first week of October, the company’s trucking operation runs a fleet of 300 to 350 rented and leased units around the clock. The trucks pick up tomatoes from contracted growers located throughout the Sacramento Valley and deliver them to its three factories. 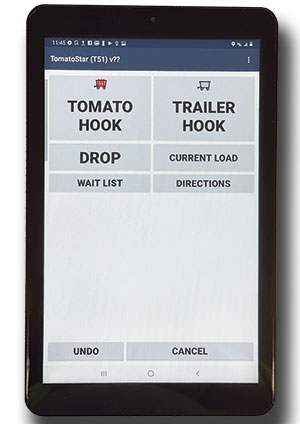 Cellular coverage can be spotty in the rural areas where Morning Star’s trucks operate, Reuter said, so providing drivers detailed maps of those areas made more sense than relying on widely available GPS location apps that operate on mobile devices.

“A tomato field is not an address, you can’t just punch in an address,” he said.

That’s why the company has used GPS data loggers to geo-locate the tomato fields and overlay their coordinates onto existing Google-type maps, Reuter said.

Morning Star plans to expand the beta test to more units this summer with the goal of releasing the program fleetwide by the 2023 growing season and eliminating the need to print and distribute hundreds of map books throughout the fleet.

Reuter said for the last 40 years the company’s interest in telematics has been driven primarily by a desire for greater efficiency than the tachographs the company began deploying in the 1980s.

Now, after integrating a third-party telematics platform with its logistics operations, the company has the data it needs to deploy trucks to the fields where they are most needed.

Reuter said when he first started working as a driver for the company in the mid-1980s, it wasn’t uncommon for drivers to wait two to three hours to receive a load of tomatoes in the field.

With the company’s logistics operation more fully integrated, its drivers rarely experience wait times longer than 15 to 20 minutes, if at all, he said.

Telematics also helps the company greatly enhance safety by providing information that can encourage drivers to operate more safely. The company accomplishes this by tying the drivers’ safety performance with their bonuses.

As for future developments such as autonomous trucks, Reuter said Morning Star Co. will always take a hard look at how the technology can enhance its efficiency.

“I wouldn’t say we’re going to just jump into it just because it’s there, but it seems to be the wave of the future,” Reuter said. “Maybe I won’t be around to see how far it goes, but we’re certainly not going to just sit here [and ignore it].”