ASU professor selects 6 essential reads by, for and about LGBTQ youth

June is Pride month, a time to commemorate the people, places and events that have catalyzed change for the LGBTQ community.

Arched by the story of the Stonewall Uprising of 1969the monthlong observance calls attention to LGBTQ culture — including artists, creators and authors — and that can be an affirming space for members of the LGBTQ community, especially among young people still struggling with identity and acceptance.

“Research tells us that reading fiction increases capacity for compassion and imagination,” Blasingame said. ”Educators around the world agree that students need to read about characters who reflect their own personal identity, as well as characters who are different from themselves, so that they will both embrace their own true selves and feel compassion for people who are different from them. .”

To learn more about the stories and characters that have helped to build compassion and confidence among LGBTQ youth, we asked Blasing me to share a list of resonant reading recommendations. He selected the books below from the American Library Association’s Rainbow Project Book List, and offered his reasons for choosing them.

‘Magnus Chase and the Gods of Asgard: The Hammer of Thor’

The second book in the “Magnus Chase and the Gods of Asgard” series by Rick Riordan continues the adventures of teenage Bostonian Magnus Chase and his friends, as they attempt to retrieve the magical hammer belonging to Thor, Norse god of thunder, before it falls into the wrong hands.

The story introduces a new teen character, Alex Fierro, who is gender-fluid and also the daughter of Loki who, according to Norse myths, could change gender at will. Like Loki, Alex can also choose gender in the moment as well as shapeshift into animals. After meeting on the streets of Boston when they were both homeless, Magnus and Alex team up to prevent Alex’s mother, Loki, from using Thor’s hammer for the ultimate evil, bringing about Ragnarok, the end of the universe.

The American Library Association has called Riordan’s Alex character a “hero” and representative of “the expansive possibilities of gender for future generations,” according to Blasingame. And Riordan himself ranks high with Blasingame, who calls the author “the pied piper of adolescent literature,” noting Riordan’s authorship of the highly successful Percy Jackson series for Disney Hyperion and Disney’s affinity for turning Riordan’s books into movies.

‘Symptoms of Being Human’

One of multiple books by author Jeff Garvin on the Rainbow Project Book List, the award-winning “Symptoms of Being Human” revolves around Riley Cavanaugh, a gender-fluid teenager who describes herself/himself as sometimes male, sometimes female, sometimes both and sometimes neither one, according to Blasingame.

Riley speaks to the reader through a blog — an activity started under the advice of a therapist after someone threatens to out Riley, who has never shared their shifting identity and orientation with their parents, one of whom is a well-known politician.

Blasingame quotes renowned young adult literature expert Michael Cart, who described Garvin’s “Symptoms of Being Human” as “one of the first YA books to deal with the complex issue of gender-fluidity” in a review for Booklist. Carter says that Garvin avoids references to Riley’s birth-assigned gender throughout the book to “emphasize the dynamic nature of the situation.” This, he says, “means eschewing personal pronouns, a device some readers will find frustrating but nevertheless underscores readers’ instincts to put individuals into a box.” 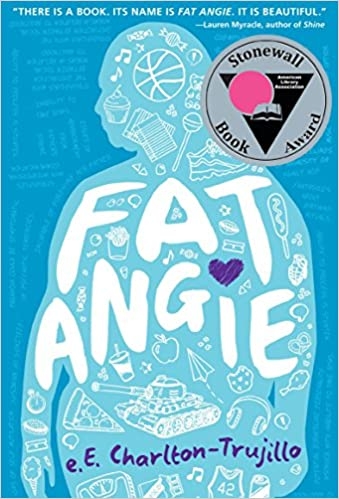 Angie lives in a dysfunctional and highly medicated family whose unraveling seems to have begun when Angie’s athletic superstar sister, a local hero, enlisted in the military rather than taking a basketball scholarship, and winds up missing in action. Angie misses her sister de ella desperately and suffers a mental breakdown but her life de ella takes a turn when a new girl named KC Romance comes to town. Angie and KC become an item.

Since first coming out in the eighth grade in his progressive hometown of Boulder, Colorado, Rafe Goldberg has been “the gay kid,” says Blasingame, describing the narrative of the book “Openly Straight” by Bill Konigsberg. The term “gay,” Blasingame says, has attached itself “like a tattoo” to the book’s central character. No matter what he does, including actions upon which his sexual orientation has no bearing, people begin by acknowledging that he is the “gay soccer player” or “gay writer.”

When Rafe leaves Boulder to attend a prestigious all-boy’s prep school in Massachusetts, he intends to no longer be openly gay, but rather to be private about his sexuality and prove to himself he is more than just “the gay kid.” find out at Natick School if he really has the skill set to make it without favoritism.

Flipping the script on the coming-out experience is unique and effective, says Blasingame of Konigsberg’s “Openly Straight.” The book won the Sid Fleischman Award for Humor in 2014. It also made the Young Adult Library Services Association’s Best Fiction for Young Adults list for 2014.

‘Some Assembly Required: The Not-So-Secret Life of a Transgender Teen’

A memoir about transgender self-discovery, Blasingame describes “Some Assembly Required: The Not-So-Secret Life of a Transgender Teen” as “often funny, brutally frank and at times heartbreaking.”

Born Emerald Andrews with the assigned gender of female, Arin Andrews knew he was not female. After Arin’s attempted suicide de ella convinces his mother that Arin really does feel like a man trapped in a woman’s body, she gives him her full support de ella as he starts down the road of changing his gender de ella.

“Publisher’s Weekly” described Andrews’ book as “a brave book that handles complicated and sensitive topics honestly and, at times, with humor.”

‘Rethinking Normal: A Memoir in Transition’

In her book “Rethinking Normal: A Memoir in Transition,” Katie chronicles her life journey, which began as Luke, with the assigned male gender at birth, and almost ended with a suicide attempt brought on by struggles with gender dysphoria and cruel treatment by family, classmates and school officials.

Her only advocate, her mother, helped Katie through a legal name change, genital reconstruction and counseling.

Blasingame calls this an important book for young readers struggling with identity. He says Hill’s book includes facts that trans youth need to know and a set of tips for talking to transgender people.

James Blasingame is a past executive director, former president and former journal editor for the Assembly on Literature for Adolescence of the National Council of Teachers of English and has four decades of experience working with LGBTQ authors and books. He is also the chair of the board of directors of the Arizona Humanities Council, state chapter of the National Endowment for the Humanities.