We hope to not ruin Lockhart, but it must be told, the capital of Texas barbecue has the makings of a diner’s paradise, separate from the smoked meats that have made the town famous. Just south of Austin, the seat of Caldwell County has quietly established itself as a haven for hospitality industry veterans looking to expand as Austin outgrows its own boundaries.

While it might have been ludicrous a few short years ago to suggest that Lockhart in any way would have such close ties to Austin’s food and beverage scene 30 miles away, it has indeed supplanted more populous exurbs like Pflugerville, Del Valle, and Buda as a dining and drinking destination, regardless of their close proximities. Lockhart, Luling, and Taylor all lie on what was once the Chisholm Trail, a former major cattle highway, which might explain Central Texans’ proclivity for smoking brisket and why some of the best smoked briskets in the world can be traced back to one of these three towns. Historically, railroads, cotton, and barbecue made Lockhart what it is today. However, this latest wave of bars, restaurants, and shops, along with a handful of niche businesses like Mill Scale Metal Works, will help define what Lockhart will be tomorrow.

Set against a blue sky and white cloud, the faded red brick of the historic Brock Building (more on that history in a bit) creates a familiar triptych of color as I stroll through the pink door of Best Little Wine & Books, which officially opened on April 15. Proprietor and wine guru Kaye Askins is picking out a bottle for a first-time patron.

“This is truly just the little ol’ neighborhood bottle shop,” she tells me. “It’s 700 square feet, four tables, and a revolving selection of 150 wines from just about every major region. The vibe is all about comfort, relaxation, and approachability.” Askins’ dog Chicken, a local fixture, climbs into my lap as I sip a glass of rosé and chat with professor Sharon Evans, the woman Askins just turned on to a Cabernet Sauvignon from the Columbia Valley.

The books occupy a corner nook of windows – mostly titles by female authors about wine and food. This complements Askins’ selection of wines, which is predominantly from vintners who are female, minority, and/or practice low intervention.

Comfort, relaxation, and approachability epitomize what’s going on in Lockhart at large. Askins, a Ft. Worth native, was commuting back and forth to Lockhart almost weekly when more than a few locals asked whether she planned to open a wine bar in town. This inspired a lightbulb moment. “Lockhart has such a foundation for authentic Southern hospitality and wide-open arms for female business owners. You can’t kick a rock without it being in front of a woman-owned bar, shop, or restaurant,” says Askins. “I needed that community who believed in me enough to get me started.

“My goal with Best Little is to take that torch and pass it on to the Lockhart community in a space that’s light, bright, and cheery.”

At just 1 year old, Old Pal Bar feels like it could have been on the corner of West Market and South Main streets for decades. “It’s kind of like my love letter to old Austin, how it used to be,” explains proprietor Travis Tober. “Lockhart now kind of reminds me of East Austin, old Austin, what I fell in love with.” Tober is most known for the nationally lauded Eastside Austin bar Nickel City; with his bar experience, foresight, and hustle, it would only make sense he’s among the new vanguard in Lockhart.

Tober, who also has part-ownership of Best Little Wine & Books, has no illusions that the town will soon be drastically altered: “With Tesla opening up 20 minutes from here I think the damage is done, so let’s get the cool people out here while we can.” Maybe in a decade or so he’ll open a love letter to Lockhart in Fentress, a quaint riverside town just a few miles south that has yet to feel the effect of the monolithic changes emanating from Austin. 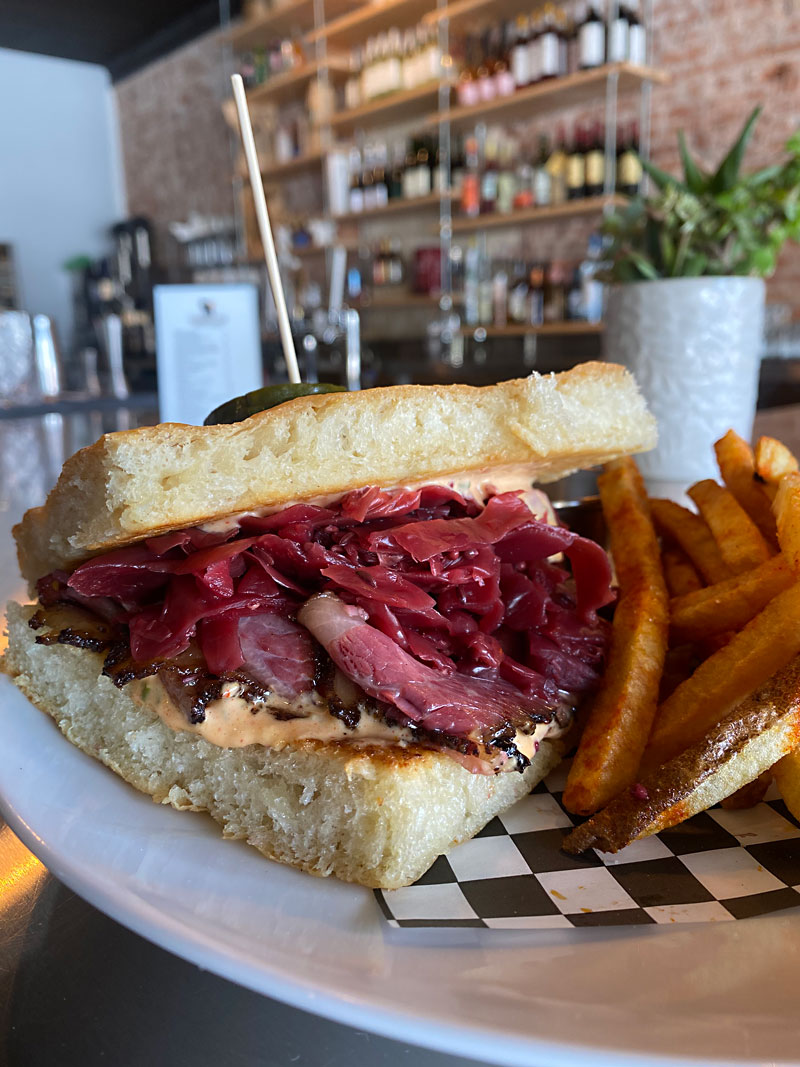 Sarah Heard, the part-owner/chef of Commerce Cafe with partner Nathan Lemley, grew up in Lockhart. “Quiet” was how she nicely put it, describing the town a few decades ago, when insurance offices and antique stores populated the square.

Heard and Lemley, who also own Foreign & Domestic in Austin, live in Luling. After many a commute through the formerly somewhat-shuttered square, they kept their eye on a vacated restaurant space in the oldest building on the square. They did their homework, then signed a lease in the 170-year-old structure.

On March 19, 2020, Gov. Greg Abbott officially limited social gatherings to 10 or fewer people, effectively closing bars, restaurants, and schools; Commerce Cafe opened on May 29, 2020, when restaurants were allowed to open at 50% capacity. Undeterred, Heard and Lemley worked to make Commerce Cafe the answer to what the dining-out folks of Lockhart wanted. Their menu was first guided by a local discussion board, and the menu items were piloted at Foreign & Domestic.

“We looked at what Lockhart didn’t have options for and got them on the menu,” Heard says. In addition to a bespoke chicken-fried steak, the menu is rounded out by fresh pasta dishes, sandwiches, and a Monday Night Family Meal with a salad, protein, plenty of sides, and bread of some sort. Tuesday offers an all-night happy hour.

“We want to be the super welcoming cafe on the corner that all the locals go to… but I don’t know that we’ll open for breakfast,” Heard chuckles. “Breakfast is not fun to operate.” 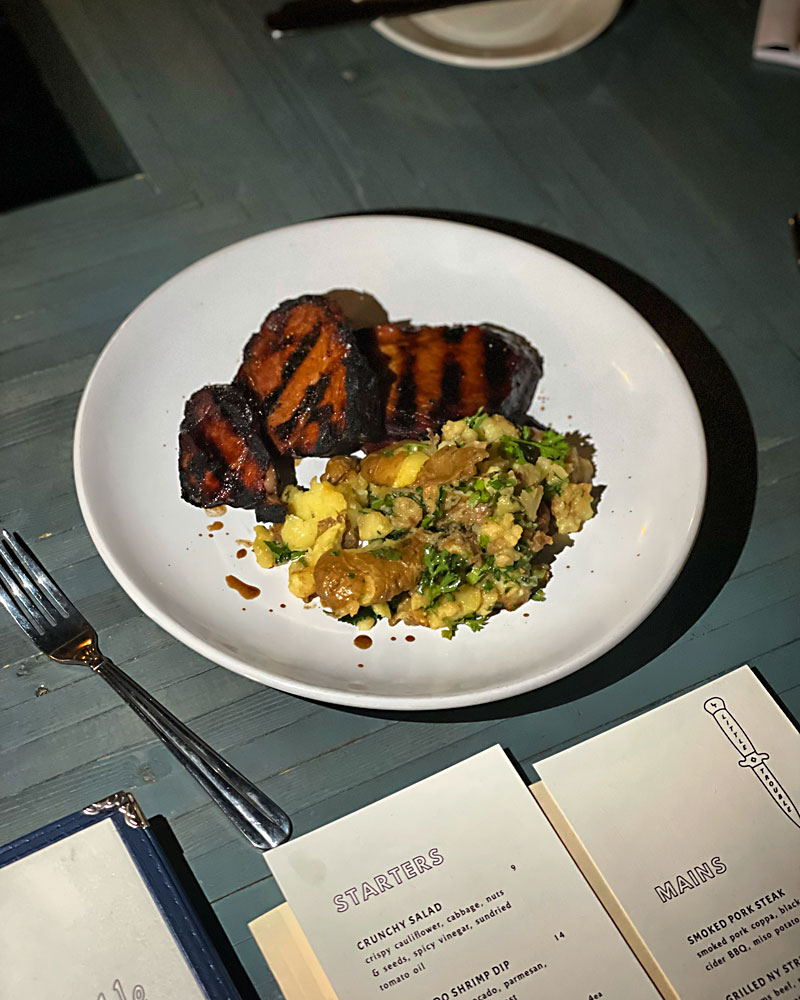 Housed in the basement of the Brock Building (1898) – what was once a dirt-floor boxing gym, among many other things – lurks Little Trouble. A boxing glove hangs beneath the stairs, commemorating this history. Speakeasy vibes and a strong sense of history linger in the architecture of the subterranean dining room and bar.

“I wanted the menu and everything else to reflect where we are in Texas and the vibe of the place,” says Casey Wilcox, chef and part-owner of Little Trouble. “Walking into this room kind of sealed that deal.” Wilcox, former head chef of Justine’s, has imported a similarly sultry ambience to the square, though he adorned his corner with his unique aesthetic.

Fittingly, the menu centers German and Mexican foodways, complemented by complex flavors elicited from harissa, miso, and chimichurri. This German Mexican influence is prominent in Texas tartare: raw beef, smoked cheddar, pickled jalapeño, cilantro, and fresh tortilla chips, with the smoked cheddar and cilantro cooling the spice of the pickled jalapeños and the dressed and spiced raw beef, the chips contributing a textured crunch. Wilcox’s fare is cowboy chic, rustic yet refined with classic techniques, playful in its complexity as it nods to its surroundings.

Little Trouble has persevered; a miracle, considering the restaurant opened a week before Abbott’s statewide shutdown decree. “We opened on March 12, 2020; we had two big services and then we were takeout only. And for a minute we were the only place you could have a drink, beyond a beer, on Sunday,” Wilcox tells me.

“Travis Tober would come down, and I hadn’t talked to anyone for a week. I’m just upstairs prepping by myself, and washing all the dishes, and doing the to-gos… so defeated, he’d come in and deliver [a speech] like a WWE wrestler. ‘Lockhart’s Rising! You’re going to make it, come on boy!’ And I’d go from being all down to, ‘All right man, we got this, we got this,'” recounts Wilcox, who still works 90-hour weeks when he has to.

Growth is inevitable, which means that people are leaving Austin and coming to Lockhart, a town united in its uniqueness and lack of big-box stores. Instead, there are cool restaurants, bars, shops, and people. “It feels like it’s definitely blowing up. Every week it keeps growing, everything gets busier, somebody out here in food and beverage is doing something exciting every week, the community is kind of busting at the seams with excitement,” Wilcox says.

According to Wilcox, who also sees an erstwhile version of Austin in these small-town streets, Lockhart has embraced them. They are riding the wave together, working to re-create those moments that inspired them in spaces where folks can commiserate, clink glasses, break bread, and inspire other pioneering entrepreneurs who can perpetuate that communal energy into the future.