Composer Lorne Balfe tells IndieWire how he created different pieces of the score to honor the experience of reading Robert Jordan’s books and reflect the eclectic mix behind the turning of The Wheel.

Enough sprawling fantasy epics have been adapted for film and TV in the past 20 years that the genre has developed a set of conventional sights and sounds. The music, for example, has its own sense of sprawl, with sweeping orchestral and choral arrangements whose influence traces back to Tolkien — or, in this case, Howard Shore’s Wagnerian opus for the Peter Jackson “Lord of the Rings” films. When approaching Amazon Prime Video’s take on “The Wheel Of Time,” composer Lorne Balfe and and showrunner Rafe Judkins were determined to buck convention. Balfe created distinctly different sounds that aren’t necessarily concerned with making the world introduced in Robert Jordan’s bestselling novels feel vast and operatic. But he did create a lot of them.

The first album of music for the show was released in advance of its premiere, full of conceptual ideas for the series and almost as a gift and a signal of faith to fans of the source material. “I wanted it so [that listeners] that knew the books were able to listen to this as its own identity and feel connected to it,” Balfe told IndieWire.

“I was subtly joining Facebook Groups and following the discussion about the shows. So I was absorbing it all before writing a note,” Balfe said. “We know that we could have done this soundtrack with an 80-piece orchestra, but that’s not really what the fans have been listening to.” The composer connected with the music that fans of Jordan’s work felt evoked the setting, the world of The Wheel — mostly prog rock and folk influences. He also discussed with Judkins the show’s approach of blending cultural traditions and Western and Eastern visual influences to create a sense of a diverse and nuanced world.

“We were talking about reference points and [Judkins] had referenced music from New Orleans, and Balinese music,” Balfe said. “And what [Judkins] was really trying to get down to the fact that Southern music has embraced lots of different cultures to make the actual sound. How do we do it, if we embrace different things to make our own?”

Josha Stradowski and Mat Cauthon in “The Wheel of Time”

How Balfe gave the show’s score its own ethos was through a hybrid of musical folk traditions and instrument choices. “You can have an Irish uilleann pipe, but why not also have something that’s totally different, like a sitar from India and Balinese gamelans? Just create our own sonic world. There are no rules really with it,” Balfe said.

The world without rules that Balfe created, then, is one that’s no less full than one inhabited by an 80-piece orchestra, but is much more haunting and atmospheric, emphasizing the strangeness of the world as the characters come to discover it. It’s one that’s unafraid of a charged, electric guitar sound even as it embraces different percussive and melodic patterns which make the world of The Wheel seem more soulful or more dangerous and chaotic by (if you’ll excuse the pun) turns. “Why can’t a gospel choir be the sound of the heavens opening up? There’s no reason why not. I think being able to experiment and also having the team want you to experiment… it’s a lovely experience to be able to do that,” Balfe said.

With a world of influences as big as this show’s, Balfe had to bring the same intentionality to which instruments and which musicians he worked with as the show did with casting actors. Peter Cox from the band Due West and the Southern folk group Our Native Daughters both came up as points of reference for Judkins and Balfe and evolved into the vocalists Balfe used to create songs in the different languages ​​of the world of the show. 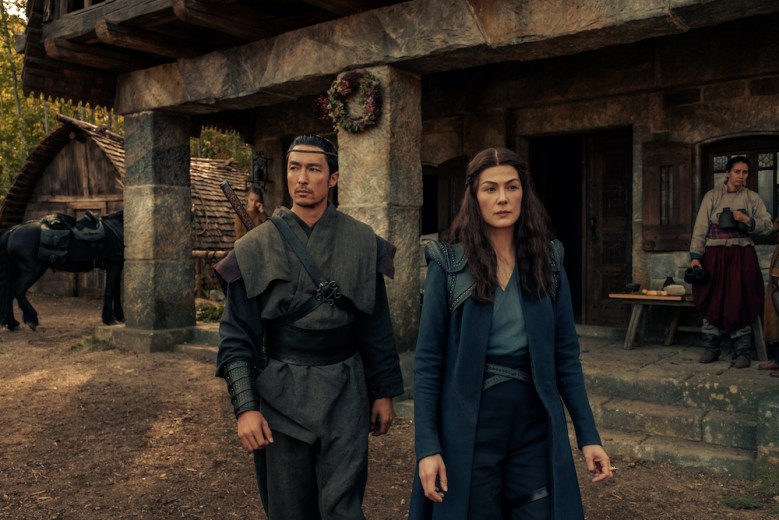 Daniel Henney and Rosamund Pike in “The Wheel of Time”

The ability to bring in musical collaborators and experiment gave the show’s musical footprint a satisfyingly vast scope. “We were recording in Bali and we were recording in Italy and Spain and Tennessee. We were able to kinda look at it as the bigger picture — what is a world sound — and embrace these musicians from all these different countries and get them involved,” Balfe said.

The flexibility and diversity in Balfe’s sound, in some ways, arose as an unexpected benefit of producing the score in a more remote fashion during the COVID-19 pandemic. “You can literally just think bigger,” Balfe said of what recording via video conference brings to the table. “[I was doing research about a] Carnyx, which is this pre-Roman instrument, and it was like, ‘Oh, well, [the musician’s] in Italy. Great. Let’s record him.’”

The circumstances of the recording also helped speed Balfe up in terms of his ability to try things and iterate on those experiments quickly. “The fact that you’re sitting there and you’re writing something and all of a sudden I can send it straight to Will Greig in Nashville, who’s gonna start playing banjo on it, [that ability] you have always been there. We just never kind of looked at it in that way,” Balfe said. “I think we’re gonna be less nervous about it for season two because that’s the thing we know we can do.”