Writer Dolly Alderton and director China Moo-Young are our guests on our next Ask the Write Questions podcast recording 9th June. What would you like to ask them? Email us at writersroom@bbc.co.uk or add your questions in the blog comments below.

Created and adapted for television by Dolly Alderton and inspired by her own wildly funny, occasionally heart-breaking, internationally bestselling memoir of the same name, Everything I Know About Love will give an unflinching account of surviving your 20s.

The central love story of Everything I Know About Love is between childhood best friends Maggie (Emma Appleton: Pistol, The Witcher, Traitors) and Birdy (Bel Powley: The Morning Show, Informer, Diary Of A Teenage Girl). But it is also a “raucous girl gang show”, set in a 2012 London house-share inhabited by four girls – Maggie, Birdy and their mates from university, Amara (Aliyah Odoffin in her debut TV appearance) and Nell (Marli Siu: Alex Rider) The series is an unflinching deep dive into bad dates, heartaches and humiliations and begs the question: can platonic love survive romantic love as we grow up?

Everything I Know About Love begins on BBC One and BBC iPlayer on Tuesday 7th June at 10.40pm

Watch the trailer for Everything I Know About Love

Could you summarize Everything I Know About Love?

It’s a romantic comedy drama about friendship and a coming-of-age story. Plus it’s a raucous girl gang show.

What does it feel like to see the show come to life?

Amazing, but it’s a cumulative and quite protracted experience, which I think I hadn’t quite realized. I thought when people say it’s shooting for four months that it’s all sort of done in four months. But there are so many layers of getting it right. You do your research, then you redraft the scripts, then you have a million meetings about props and what posters are on the walls of everyone’s bedroom. Then you’re talking about music, then you’re talking about the music you can’t afford which then has to be replaced with other music. Then you are talking about the color of someone’s hair in the grade. So it’s amazing watching it come to life but it’s not a Stars in Your Eyes transformation. That’s a dated reference! I thought your script goes into the sliding doors and then comes out as a TV show two minutes later. But it doesn’t!

Talk us through the story from the writing stage?

In terms of the full journey, it was optioned years ago before I finished the book. We developed it for a good couple of years and I was working out what elements of the book I wanted to put on screen and fictionalize because the book actually covers my whole life.

After it was commissioned, I wrote it all in six months which I thought was a really long time! I never thought the book would be on screen, I was just writing a memoir but when there was interest in it, it made sense because it’s the most vivid period of my life; my twenties, the decade of wilderness and learning. I’m only 33 but I look back and think of it as the most extraordinary time of my life so far. It made sense that it would be a good story to put on camera because it wasn’t just about me, it was about this chorus of friends working out what kind of women we wanted to be when we intersected with the adult world. 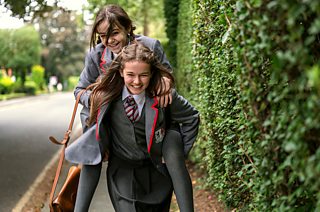 What were the most important elements for you to keep?

First and foremost was the central drama of two best girlfriends who’d grown up together and their story as a romantic story. By which I mean looking at the ups and downs of their relationship with the same kind of focus and lens as you would in a romantic comedy. So, elevating that friendship to a place of premium drama that’s normally reserved just for romantic relationships. So looking at that being the driving force of the story was the thing I most wanted to preserve. I also wanted to capture that girl gang that I feel resonates with a lot of people who have read my book. That sense of women coming together, making a home together, being enmeshed in each other’s domestic lives, being naughty, being mistreated and being mischievous together. 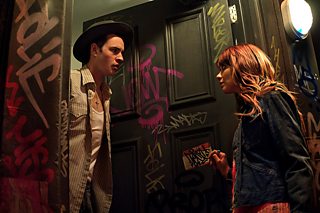 What do you think fans will love most about it?

Something that I really wanted to give to the readers of the book who were coming to the TV show was to retain that kind of millennial experience and millennial nostalgia that I knew lots of people enjoyed in the book. It’s obviously just so delicious to put on screen and so fun to flashback to the noughties with two teenage girls putting hair gems in or listening to Hear’Say. I also wanted to hone in on what those cultural touchstones were as they are so recognizable for our generation and hopefully for younger audiences. It will be a nice throwback. I can’t believe that my childhood is now a piece of nostalgia. 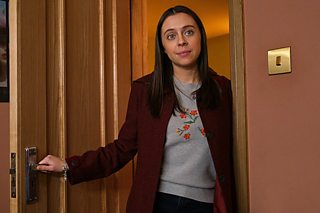 What do the people who inspired the story think about the TV series?

The people who inspired the story are my best mates. They miraculously decided to carry on talking to me and being friends with me even after I wrote about them slowly for years. I’m so lucky and they are really happy. Imagine if they weren’t happy, I wouldn’t have a TV show.

What was it like walking on set and seeing those locations come to life?

I was just so, so excited. Charlotte, who’s our Production Designer, just completely nailed this hinterland of somewhere between student and adulthood in design where it’s kind of nearly nice, but it’s also mixed in with hangovers from adolescence and bizarre kitsch findings like a light in the shape of a baguette on the kitchen wall, which I never quite understood. Plus memorabilia from nights out; stolen road signs and fish and chip shop signs. It’s quite disgusting living with a bunch of girls in their twenties. I really wanted that. Charlotte decided there would never be a radiator shown in our house that wouldn’t have some ratty pants hanging off it. 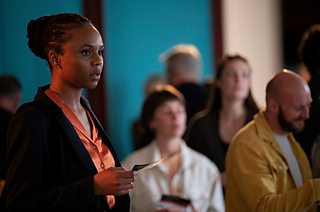 Tell us about the costumes?

It was my favorite place to hang out. I often would just go and hang out in the costume department – all the clothes were so authentic. Basically everything is from a high street shop in 2012 or from a vintage shop in Camden. There’s this specific smell of vintage shops in Camden where everything’s kind of cool but also kind of flammable. Everything smells a bit like a damp cricket pavilion which was what Matt Price’s department smelt like and it was very comfortable to me! Matt chose pieces for the girls without realizing that I had owned them. 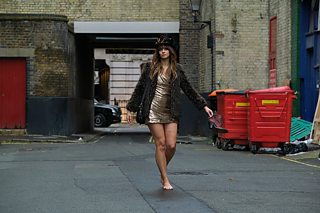 Tell us about the casting process?

It was kind of like finding a boyfriend. It was so like when you meet someone that you like. I remember the first time that I saw Emma (Appleton) in a chemistry test, I just knew it was love. I just knew it had to be.

Tell us about the shooting locations?

I drank an enormous amount of M&S tinned cocktails on the West Coast train to Manchester. I loved shooting there and every person on that set was the very best at that job. I also loved coming to London for a few weeks; it felt like we were all going on a school trip and it was weirdly bonding as a whole crew. I always knew I wanted the show to shoot in New York; for every generation New York has held something of being a place of dreams, particularly for millennial girls. We grew up watching American shows on Nickelodeon and HBO and watching Sex and the City. I always knew Maggie was going to be one of those incredibly romantic, dreamy, whimsical, nostalgic people and New York was her kind of Oz, a place of pilgrimage, where dreams will come true. There’s lots of locations that were found in my favorite New York romcoms. 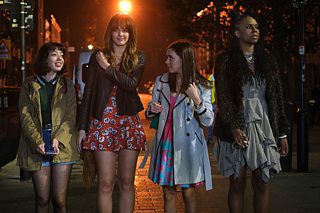 What is the universal appeal of the show?

What can audiences expect from Everything I Know About Love?

They will laugh, cry and ring their best friend immediately.

Describe Everything I Know About Love in three emojis?

The dancing lady. The heart. Then the wine glass. 💃❤️🍷

Watch Everything I Know About Love from Tuesday 7th June at 10.40pm on BBC One and BBC iPlayer