The start of any new fantasy season comes with the drip-feeding of price reveals on Twitter from the Premier League’s official fantasy account.

On day one we’ve had Arsenal, Manchester City, Brentford, Brighton and Leeds, including some of the biggest stars in the game.

The FPL price of City’s big signing Erling Haaland has been hotly anticipated for months, but *spoiler alert* he isn’t even the most expensive fantasy option from the blue side of Manchester…

It’s still five weeks until the Premier League 2022-23 campaign gets underway, but there’s going to be plenty of talk among fantasy circles over which Manchester City attacker to back at the start of the season: Kevin De Bruyne or Erling Haaland. Well, that decision might get a little bit easier with the prices in front of us — crucially Haaland comes in £0.5 million cheaper. 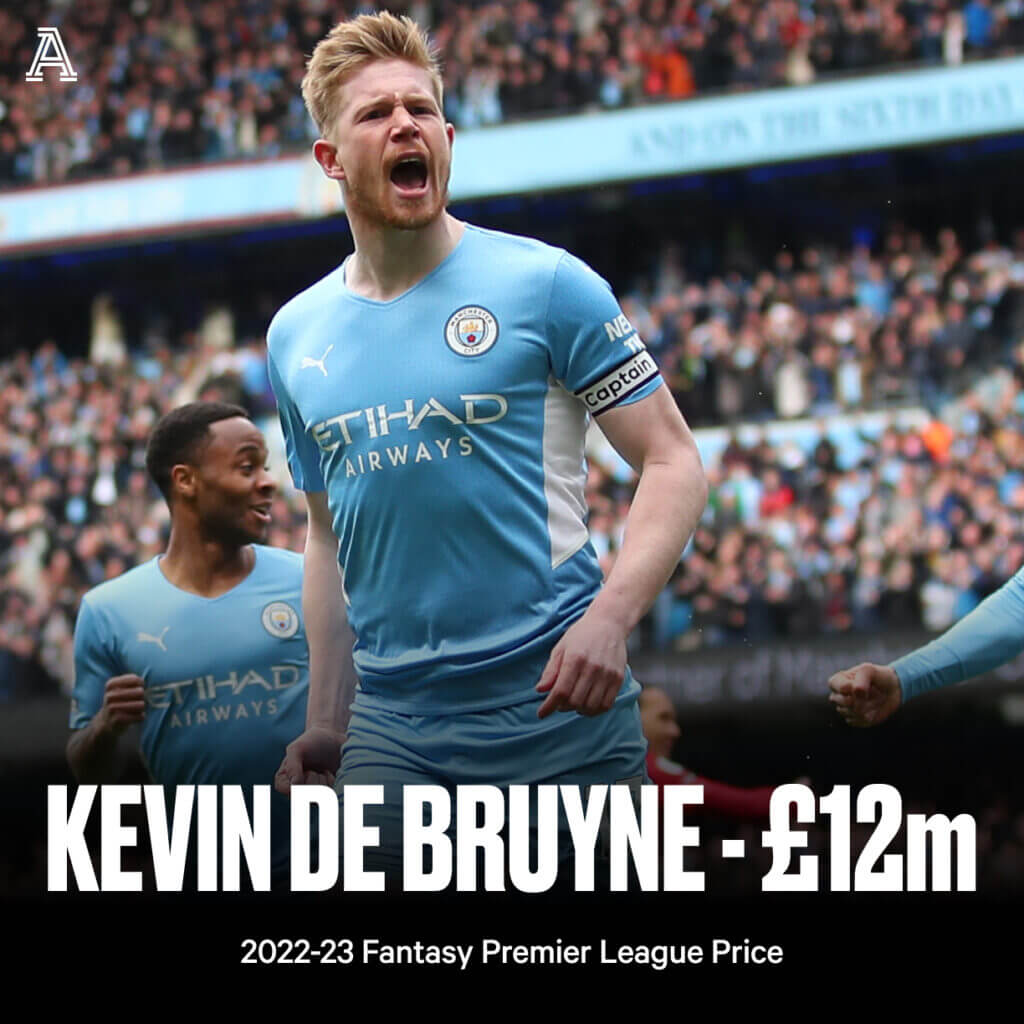 The discrepancy in their prices and the reaction to a cheaper price for Haaland might raise some eyebrows, but he has been priced cautiously for good reason. While he’s shown for Dortmund his world-class ability, scoring 83 goals in 87 appearances, he’s currently unknown in the Premier League. My colleague John Muller wrote an excellent piece weighing up City’s move for Haaland and makes some valid points about his very hot run of form, his style of play, and his suitability for a Pep Guardiola side. You can read that piece here. 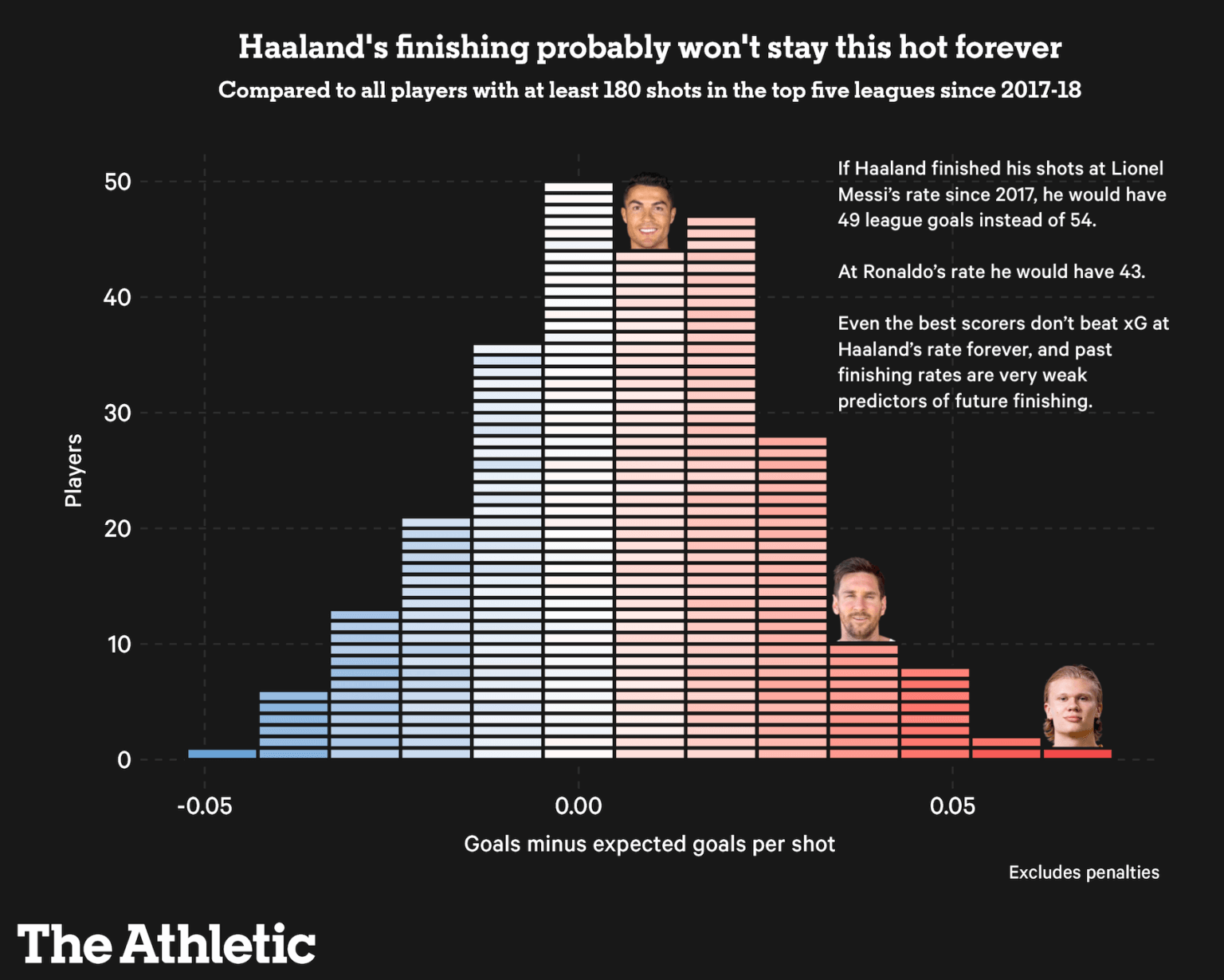 We also have to factor in that Haaland is classified as a forward, whereas De Bruyne is a midfielder and so he receives one less fantasy point per goal and isn’t eligible for clean sheet points either.

At this price point, Haaland is very likely to start the season as the highest-owned forward in the game and it’s clear that those behind the game want the big signing of the window to be affordable for his first season. It will take a brave manager to bet against Haaland: we expect him to be highly backed as a captain pick too, particularly in Gameweek 2 against Bournemouth and Gameweek 5 against Nottingham Forest. We could see him on spot kicks for Manchester City and crucially he won’t be at the World Cup in Qatar this winter.

For some more reading, check out our Manchester City reporters Sam Lee and Pol Ballus looking at how Guardiola wants to use Haaland this season.

Looking elsewhere at Manchester City, there are some diamonds: Jack Grealish (£7.0m), Kyle Walker (£5.0m) and Riyad Mahrez (£8.0) have all decreased in price since last season, but at present it seems unlikely that we will see consistency of minutes for those players.

I’ll be keeping a close eye on Mahrez during the opening weeks of the season — the departure of Gabriel Jesus could see him get a sustained run on the right wing and he will benefit from having a true No 9 to link up with. Phil Foden (£8.0m) remains at the same starting price as last season and avoids reclassification to a forward with the arrival of Haaland. Hopefully this is the season he fulfills his potential by being given a free role with Haaland leading the line. 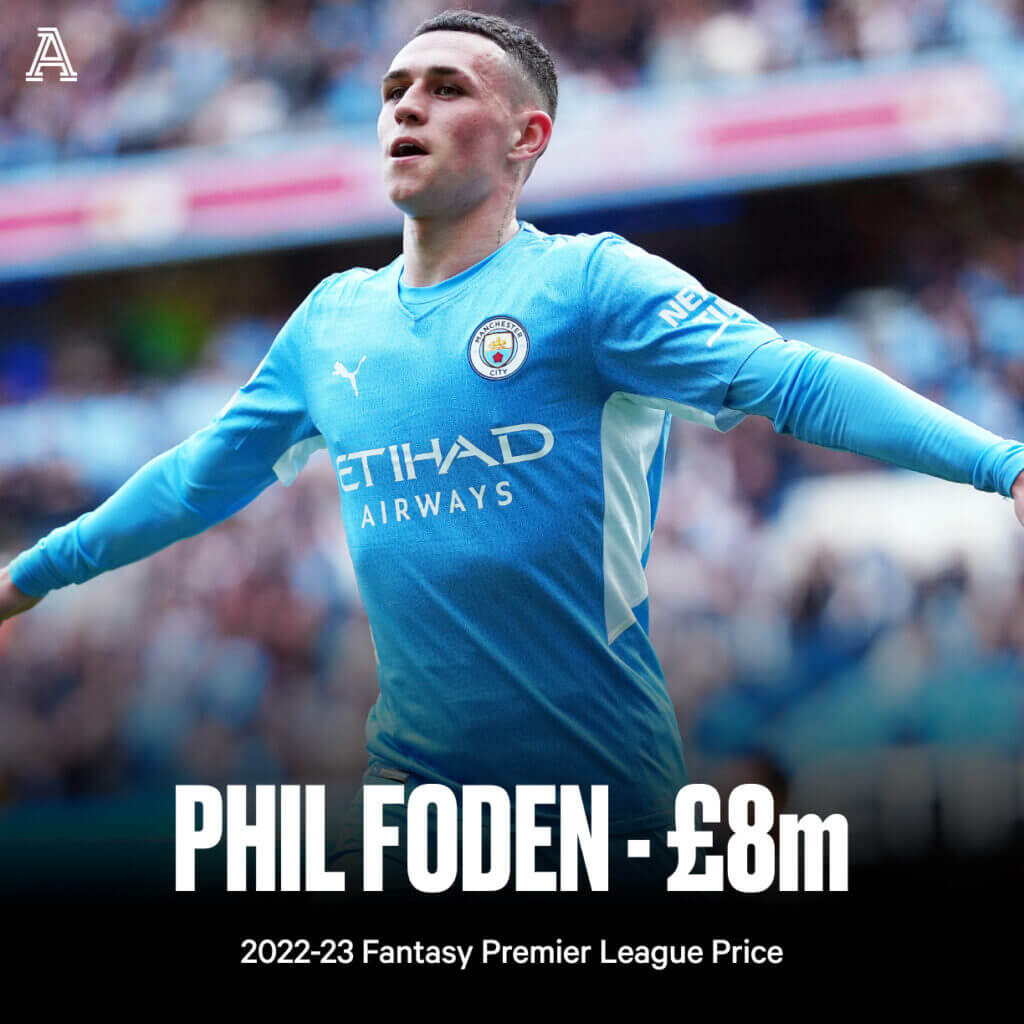 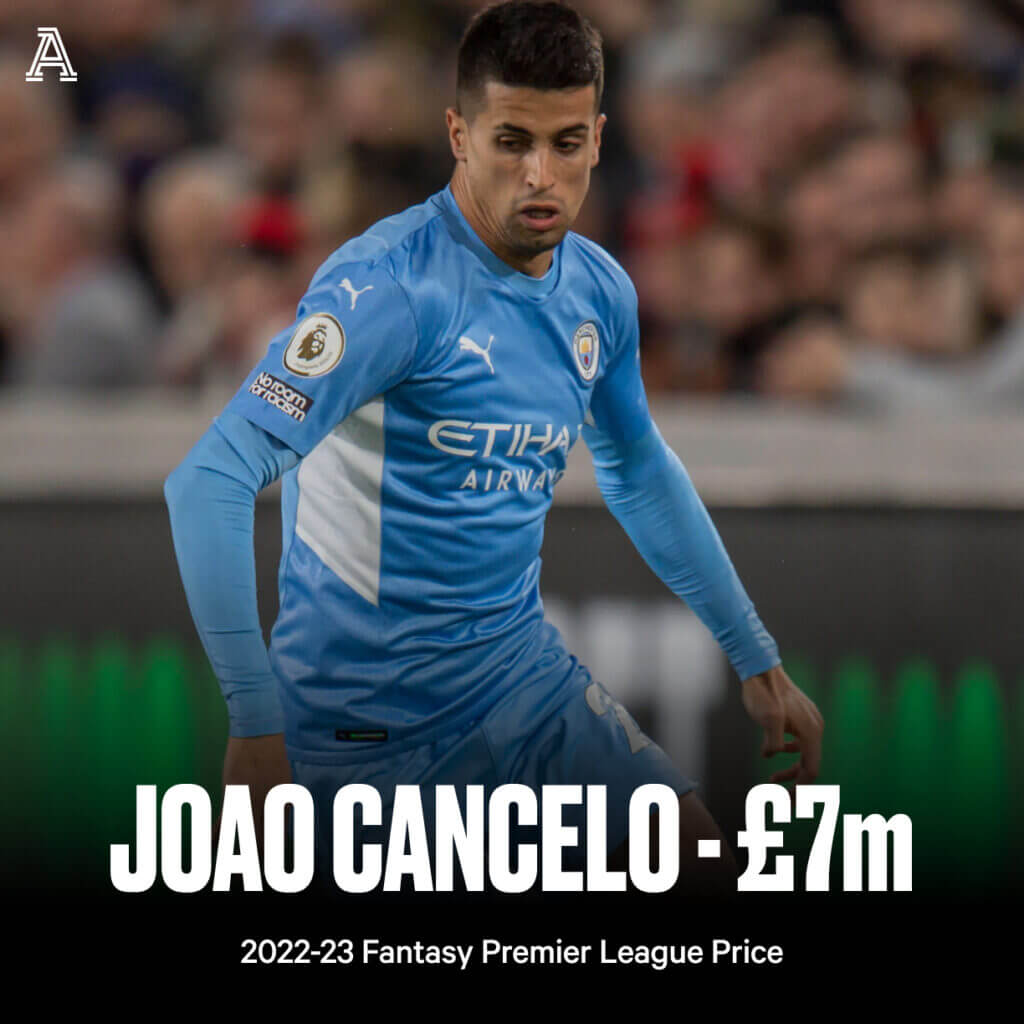 After hitting more than 200 points last season to become Manchester City’s leading fantasy scorer, a price hike was inevitable for Joao Cancelo (£7.0m). He’s played the most minutes of any outfield City player last season, hitting double digits for goal involvements while picking up clean sheets for 19 of their 21 shut-outs. His inclusion of him in our Gameweek 1 squad is entirely justified, as the most nailed-on Manchester City player and one who recovers quickly, avoiding sustained periods out injured.

It comes as no surprise to see Bukayo Saka (£8.0m) come in as the most expensive Arsenal player, with Gabriel Jesus’ transfer from Manchester City not yet officially announced. Saka was ranked fifth for shots (97) and amassed 20 attacking returns over the course of the season. With competition looking fierce in attack as Arsenal hope to strengthen in the window, he looks to be the safest bet for the start of the season.

However, if Martin Odegaard (£6.5m) or Gabriel Martinelli (£6.0m) are regulars in this campaign, they could offer fantastic value. New signing Fabio Vieira also comes in at £6.0 million. 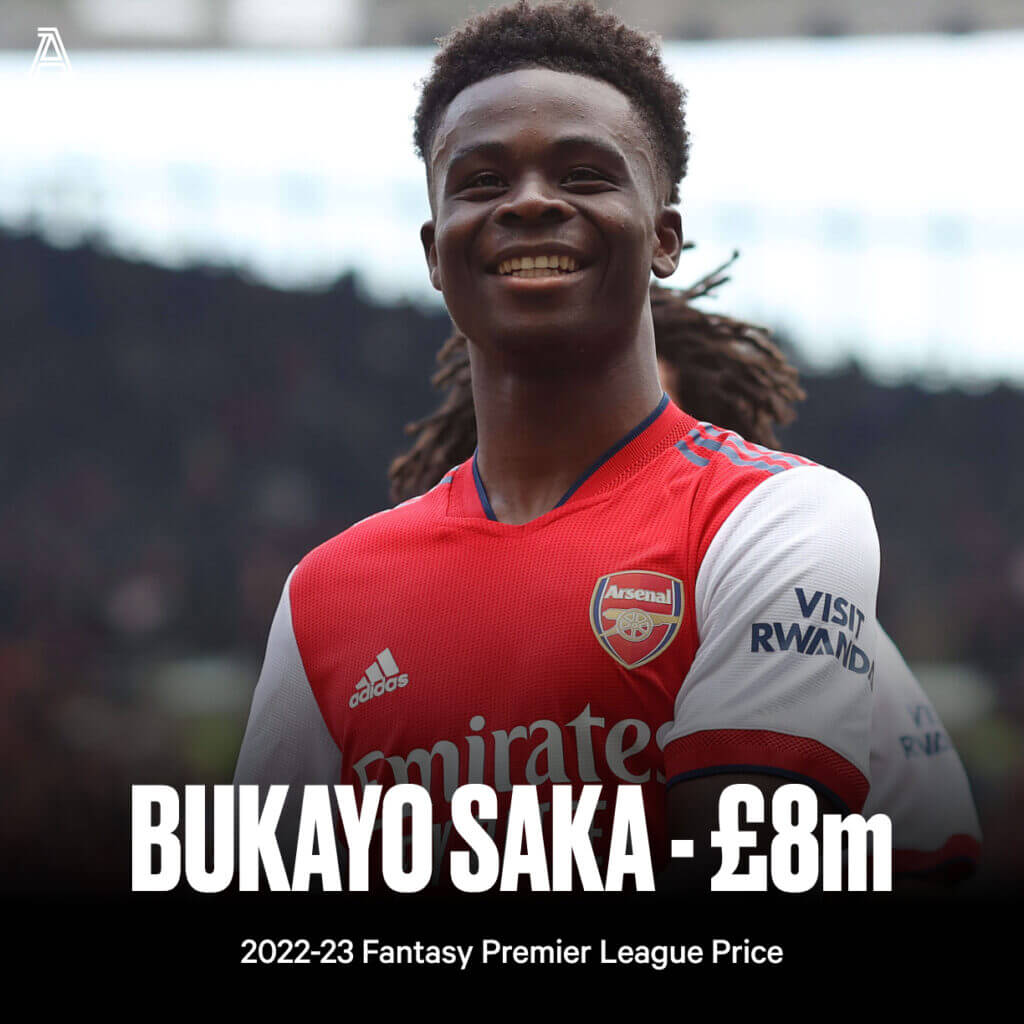 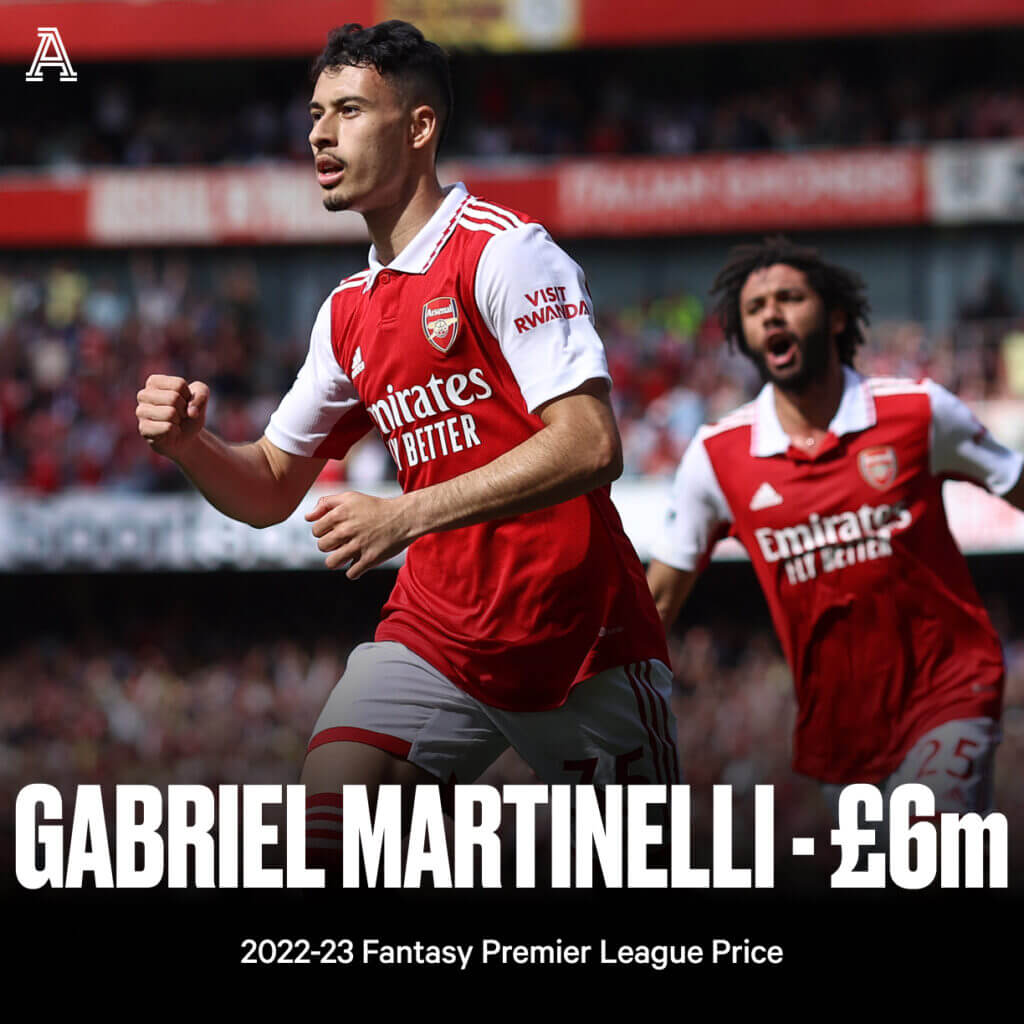 There looks to be plenty of value in Arsenal’s defense too with Aaron Ramsdale (£5.0m) and Gabriel (£5.0m) key assets from last campaign. Arsenal kept 13 clean sheets last season, ranking them fifth in the Premier League, while Gabriel’s five goals made him the top-scoring defender. Ben White (£4.5m) and full-back Takehiro Tomiyasu (£4.5m) come in even cheaper: White was among the best-performing defenders at this price point last season, but there is some concern among Arsenal fans that William Saliba could displace him after returning from an excellent loan spell with Marseille that earned him a France call-up.

The release of Brentford’s prices also brought news of the first reclassifications of the season: Bryan Mbeumo (£6.0m) has moved from midfielder to forward which diminishes his appeal, with Sergi Canos (£5.0m) going from midfielder to defender. Note that Canos is suspended for Gameweek 1 having been sent off on the final day of last season in the loss to Leeds United.

Brentford are among the teams with favorable fixtures to start the season, meaning there will be plenty of interest in talisman Ivan Toney (£7.0m) who avoids a significant price hike. He’s scored eight goals in this calendar year already and has a flawless record from the penalty spot. David Raya (£4.5m) could be a shoo-in as our go-to budget goalkeeper to start the season: only Jose Sa had a better save % than Raya (76.8 per cent) in the Premier League last season.

Pontus Jansson ranked second for expected goals (xG) among defenders last season at 4.52, scoring three times and benefitting from the presence of Christian Eriksen. It remains to be seen where Eriksen is playing his football in 2022-23, but if he chooses to stay with Brentford, it automatically makes their players more attractive fantasy options across the board.

The biggest piece of news from Brighton’s price reveals was that Marc Cucarella (£5.0m) could provide great value — should he get a move to Manchester City and become a nailed-on starter. He would provide a big saving on Joao Cancelo (£7.0m) on the opposite flank. Fantasy managers will now be keeping a close eye on the transfer market to see if that move happens.

Brighton are ranked second on the fixture difficulty ticker for the opening eight gameweeks, making a point on some of their assets more than viable. Lewis Dunk (£4.5m) and Tariq Lamptey (£4.5) are both great options, with Dunk perhaps the safer pick for the start of the season given Lamptey’s injury record.

Looking further forward, Danny Welbeck (£6.5m) impressed at the end of last campaign, netting three goals and four assists in his final five matches. Leandro Trossard (£6.5m) and Neal Maupay (£6.5m) come in at the same price, but surprisingly Denis Undav (£5.5m), who has spent some time out on loan, is priced significantly cheaper, and could be a real bargain if he hits the ground running. He has scored 26 goals in the Belgian League last season.

Leeds were the final team to be announced but there was little to get excited about there with Raphinha heading for the exit. His price of it was n’t even announced. Patrick Bamford might be of interest to fantasy managers but after an injury-ravaged second half of the season, his price tag of £7.5m looks a little steep.