I remember the day cyberspace published its own Declaration of Independence.

It all began in 1996, with ambitious plans for staging the largest one-day event ever held online. A creative team had assembled an army of photographers, programmers, “interactive designers” and editors to document “24 Hours in Cyberspace,” where they would cull through what turned out to be over 200,000 pictures submitted by volunteers to capture “the human face of cyberspace — the new ways in which we work, play, learn, conduct business and interact,” according to the description of the book that resulted from the project).

“They covered students in South Africa’s Nelson Mandella township who use donated PCs to communicate with the outside world; exiled Tibetans who rely on the internet to preserve their culture and to enlist others to fight for their cause; Americans seeking to adopt Russian orphans online; and a father in San Jose, California who publishes Will’s Page, an electronic journal of his four-year-old son’s battle with leukemia.”

I’d visited the massive command center the creators set up in San Francisco to also publish their photos in real-time for audiences online. The website got more than 4 million hits in the 24 hours that the project was active, explained a summation at HistoryOfDomains.com.

But predictably, there was also an internet-related controversy.

That day, Feb. 8, 1996, was when President Bill Clinton signed the Communications Decency Act, which aimed to illegalize hate or “obscene” speech, a controversial law that was later overturned in court.

Critics argued the new law infringed on free speech itself in the name of protecting children. Many activists turned their websites black that day.

So while the “24 Hours in Cyberspace” site included its optimistic essay from Vice President Al Gore, it also featured a kind of counterbalancing response from Electric Frontier Foundation co-founder John Perry Barlow.

And in it, Barlow had declared the independence of cyberspace.

“On Behalf of the Future…”

“Governments of the Industrial World, you weary giants of flesh and steel, I come from Cyberspace, the new home of Mind,” Barlow began his essay.

“On behalf of the future, I ask you of the past to leave us alone. You are not welcome among us. You have no sovereignty where we gather….

“I address you with no greater authority than that with which liberty itself always speaks. I declare the global social space we are building to be naturally independent of the tyrannies you seek to impose on us. You have no moral right to rule us nor do you possess any methods of enforcement we have true reason to fear.”

Specifically, Barlow argued that the newly-signed law “insults the dreams of Jefferson, Washington, Mill, Madison, DeToqueville, and Brandeis. These dreams must now be born anew in us.”

“We will create a civilization of the Mind in Cyberspace. May it be more humane and fair than the world your governments have made before….”

In a 2004 article, reason magazine remembered it as “the doc forwarded ’round the world.” At least 20,000 websites joyfully republished Barlow’s call for independence. Soon a virtual magistrate was set up to arbitrate online grievances, with policies directed by a network of legal thinkers called the Cyberspace Law Institute.

And within weeks, an even larger counter-protest was forming.

Dave Winer at Scripting.com still hosts his 1996 webpage promising “A Celebration of Free Speech on the Internet, A Demonstration of Web Energy… And Neat Net Tricks!”

“In Feb. 22, 1996, I asked the Internet to write about freedom,” Winer remembered on another page, and the result was an interlinking “web-ring” of over 1,000 sites hosting essays written in response. And they’d all sported the same star-spangled .GIF file that proclaimed the name of their event.

It was an actual grassroots movement to articulate what democracy meant to them, and where cyberspace fit in the mix, along with thoughts on the importance of protecting our freedom of speech.

Even Bill Gates wrote an essay:

Beginning two decades ago, the PC industry developed in the United States without government control and regulations. The benefits of the resulting PC revolution were far-reaching…

We also have a national interest in freedom of expression. Throughout history, that freedom has been a hallmark of our nation which has benefited our society, and helped us set an example for the world. The free exchange of ideas on a global basis is something that is important for the US politically and economically. Let’s not undermine the worldwide trend toward free expression by setting a bad example when it comes to free speech on a computer network.

The Bill of Rights is the foundation on which our nation is built. The Internet is an enormously valuable place in which those rights must continue to thrive. Both the Bill of Rights and the Internet are potentially fragile. Mess with either of them too much, and we might ruin them.

We can’t let this happen.

And somewhere along the way, the system worked. Heeding arguments that its lawmakers had overreached, America’s Supreme Court ruled against the controversial “indecent speech” protections of the Communications Decency Act in 1997, declaring that they violated the US Constitution.

And the world moved on to other battles…

The Age That Came After

Many of those 1996 essays have now vanished from the internet, along with the original “24 Hours in Cyberspace” site — all lost to the vicissitudes of changing web hosts and the ravages of time.

And in 2004 reason asked Barlow about his early writings in the 1990s predicting our digital future, pointing out that “you sounded a lot more optimistic then, with a much more ‘nothing can stop us now’ attitude.”

Barlow had responded, “We all get older and smarter.”

But it’s a moment worth remembering when ordinary Americans showed their willingness to fight for their freedoms as a new day was dawning.

To speak up for speaking up.

And in a 2016 interview in wired emphasized that Barlow “wants to be clear: He stands by his words just as much today as he did when he clicked ‘send’ in 1996.”

Maybe Independence Day really celebrates that spirit that’s within us all. To fight for our beliefs. And to never give up.

Just four years ago the world received John Perry Barlow’s final memoir — published posthumously in 2018. In “Mother American Night: My Life in Crazy Times,” Barlow had surveyed a long and wild ride that began in rural Wyoming, in terrain so rugged that he’d seen it snow on the 4th of July. 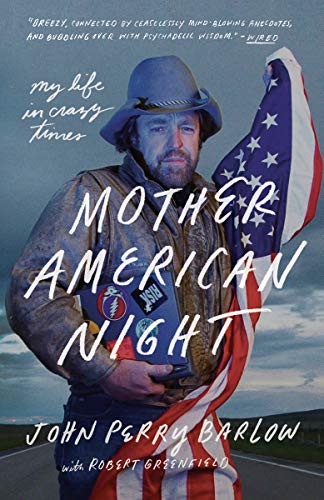 The book opens with a tale about a grandfather who’d outlived his doctor’s diagnosis for half a century. And the book’s prologue tells Barlow’s own wild tale about being revived after a near-death experience.

What amazed me most about this entire incident was that after so many years of thinking I really understood what happened when you died, I had not seen a goddamn thing. No upwardly sweeping rivers of light, no angels, no cherubim, no seraphim, no celestial beings. It all just went black. I’d gone down the tunnel of eternity and it had turned out to be nothing more than a cheap carnival ride to nowhere.

When I told my old friend and songwriting partner Bob Weir about this, he looked at me and said, “Well, it could be that you just weren’t dead enough.”

The Soul of America

Yes, it’s easy to be discouraged about the internet today. At a celebration for the EFF’s 30th anniversary, EFF executive director Cindy Cohn acknowledged a new world with a hegemony of social platforms, and EFF co-founder Mitch Kapor decried their “amplification of misinformation and hatred because it serves the business models of these companies. ”

And later Kapor added that “The more I see what has actually happened with the internet, the more I think it is a function of the dysfunction of capitalism.”

But at the same time, Cohn also noted that the group had in fact helped to “shift the dynamic” in a world where the government hoped to enact regulations against encrypted communications.

I treat July 4th as a day of reflection. And maybe the real lesson is that the spirit of America is still out there somewhere. That individuals can make a difference. And perhaps it’s only at the individual level that a difference is ever truly made.

As America ponders the ultimate meaning of hearings on the January 6 attack on our Capitol, CBS News correspondent Steve Hartman found an entirely different perspective. Writing in 2021, Hartman shared a story from the days of the pandemic about an ICU nurse with a six-month-pregnant patient “deathly ill” from Covid. But after intubation and an emergency C-section—that mother had survived. And somewhere in St. Louis, that ICU nurse ultimately threw her a very special baby shower and raised thousands of dollars. She even became the child’s godmother.

Hartman points out this was all happening right as the history of America was experiencing the darkness of Jan. 6, 2021. “It’s important, especially at the end of this God-awful week, to know that, while all that was going on, so was this. While chaos reigned in Washington, compassion ruled in this corner of the heartland and across the country.

“Because the soul of America can’t be ransacked and the solution to what ails us sure as heck isn’t under a dome.”

It’s in the hearts of all of us out here in cyberspace.