BLINKEN: We’ve all seen the sentencing, conviction of Brittney Griner to nine years in prison, and that further compounds the injustice that’s being done to her, uhh, and her wrongful detention. It puts a spotlight on our very significant concern with Russia’s legal system and the Russian government’s use of wrongful detentions to advance its own agenda, uh, using individuals as political pawns. The same goes for Paul Whelan. We’ve put forward, as you know, a substantial proposal, uh, that Russia should engage with us on and what Foreign Minister Lavrov said this morning and said publicly is that they are prepared to engage through channels we’ve established to do just that, and we’ll be pursuing that.

BUCK: That was the secretary of state speaking about Brittney Griner getting a nine-year sentence in Russian prison, or she’s going to Russian prison, as of now, for nine years. Just yesterday. The Russians have confirmed that the trade negotiations are underway for Viktor Bout, the arms trafficker, notorious arms trafficker who served as the inspiration for the Nicolas Cage character in the film Lord of War.

That trade may be happening. It would include Paul Whelan, a former Marine who was wrongfully charged with espionage in Russia, and so this is inherently a foreign policy issue, which is why the secretary of state… Anytime an American is held abroad, there’s a reason that the embassy gets involved. Now, that doesn’t mean the embassy gets you out.

Doesn’t mean the American government even says, “Hey, you’re not allowed to hold that person.” It depends on what you do. You know, if you’re drunk driving and cause a serious accident in Tajikistan; you’re gonna serve some time in prison, right? Does he want matter there’s a US embassy there. They’re gonna say, “Yeah, this person violated your laws.” They’ll be there to make sure that you have some — for humanitarian purposes, some — due-process rights.

They’ll try to do what they can with the host government to make sure that the best interests of that American citizen are looked after, essentially, is how it goes. But I know… It’s really interesting how much the audience I think yesterday of this program really felt a whole range of emotions over this when it comes to Brittney Griner. And I should… You know, there’s this amazing story. I don’t know if anyone…

I’ve seen it pop up over the years. I wonder if it is apocryphal. It is supposedly from a Ronald Reagan speech back in, I think it was, the seventies where he talked about the USS Ingraham and a refugee from the Austro-Hungarian Empire named Koscha? I’ve not been able to find that much documentation of this speech, and it looks like one of these stories that… I don’t know. It’s an amazing story, though, for what it is.

And you know what? I’ll read this one. I can’t verify the provenance of this, but it’s a good story. It’s either from a speech that Reagan gave or it’s just something that somebody made up on the internet that sounds like a speech Reagan gave and it’s really good. I know there is a USS Ingraham, there have been many of them, many iterations of that in the United States Navy. But you see this one.

This is the story that pops up, and I’m wondering if someone could send me a true source verification for this in Reagan’s speeches, ’cause I’ve done a little looking and was not — and don’t just send me, like , Reagan speech/net.php_. It’s gotta be… I gotta see some of the original source material on it. But here’s the apocryphal story or not.

“[L]ess than twenty years we would go to war because the God-given rights of the American sailors, as defined in the Constitution, were being violated by a foreign power. We served notice then on the world that all of us together would act collectively to safeguard the rights of even the least among us. But still, in an older, cynical world, they were not convinced. The great powers of Europe still had the idea that one day this great continent would be open again to colonizing and they would come over and divide us up.

“In the meantime, men who yearned to breathe free were making their way to our shores. Among them was a young refugee from the Austro-Hungarian Empire. He had been a leader in an attempt to free Hungary from Austrian rule. The attempt had failed, and he fled to escape execution. In America, this young Hungarian, Koscha by name, became an importer by trade and took out his first citizenship papers.

“One day, business took him to a Mediterranean port. There was a large Austrian warship under the command of an admiral in the harbor. He had a servant with him. He had described to this manservant what the flag of his new country looked like. Word was passed to the Austrian warship that this revolutionary was there, and in the night, he was kidnapped and taken aboard that large ship.

“This man’s servant, desperate, walking up and down the harbor, suddenly spied a flag that resembled the description he had heard. It was a small American war sloop. He went aboard and told Captain Ingraham, of that war sloop, his story about him. Captain Ingraham went to the American Consul. When the American Consul learned that Koscha had only taken out his first citizenship papers, the consul washed his hands of the incident.

“Captain Ingraham said, ‘I am the senior officer in this port and I believe, under my oath of my office, that I owe this man the protection of our flag.’ He went aboard the Austrian warship and demanded to see their prisoner, our citizen. The Admiral was amused, but they brought the man on deck. He was in chains and had been badly beaten. Captain Ingraham said, ‘I can hear him better without those chains,’ and the chains were removed.

“He walked over and said to Koscha, ‘I will ask you one question; consider your answer carefully. Do you ask the protection of the American flag?’ Koscha said dumbly, ‘Yes,’ and the captain said, ‘You shall have it.’ He went back and told the frightened consul what he had done. Later in the day three more Austrian ships sailed into the harbor. It looked as though the four were getting ready to leave.

“Captain Ingraham sent a junior officer over to the Austrian flag ship to tell the admiral that any attempt to leave that harbor with our citizen aboard would be resisted with appropriate force. He said that he would expect a satisfactory answer by four o’clock that afternoon. As the hour neared, they looked at each other through the glasses. As it struck four, he had them roll the cannons into the ports and had them light the tapers with which they would set off the cannons – one little sloop.

“Suddenly the lookout tower called out and said, ‘They are lowering a boat,’ and they rowed Koscha over to the little American ship. Captain Ingraham then went below and wrote his letter of resignation to the United States Navy. In it he said, ‘I did what I thought my oath of office required, but if I have embarrassed my country in any way, I resign.’ His resignation from him was refused in the United States Senate with these words: ‘This battle that was never fought may turn out to be the most important battle in our nation’s history.’ Incidentally, there is to this day, and I hope there always will be, a USS Ingraham in the United States Navy.”

I don’t know if that’s really from a Reagan speech. It’s one of these things that gets sent around by, like, you know, friends of friends on the internet. Listen. It’s a great story. (laughing) Is it real? I don’t know. sounds real. It’s well written. But it was making its rounds. And I just thought of this ’cause I’d seen this for many, many years circulating on the internet, and I thought, “Well, that’s kind of how I feel about any American who is held abroad.”

So, please… By the way, if you can prove that that is real, let me know. Don’t send a link that seems kind of suspect. But it’s… The basic ethos of this, I agree with, which is that if you’re American, you’re one of ours. Even if you say annoying stuff — even if you have bad politics, whatever — if you’re an American, you’re one of ours, and that still matters, still matters to me. 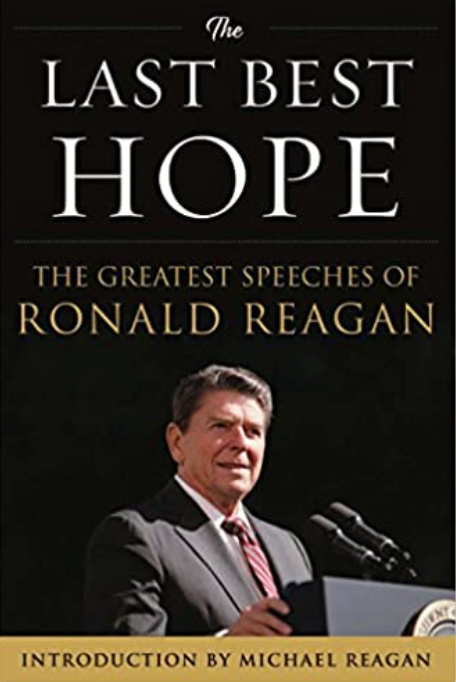 BUCK: Does Dave have the goods here? (interruption) It had better not ReaganSpeeches_phpReaganpatriot775. Dave, what do you got for us in Utah?

CALLER: In the book The Last Best Hope: The Greatest Speeches of Ronald Reagan, by Ronald Reagan, the story you related, it starts on page 23. The citation on page 19, this was delivered to the first Conservative Political Action Conference January 25th , 1974. And I’m actually looking at it in Google Books.

BUCK: I think bingo. [Listen to the speech] Can the referee signal a touchdown? I think we’ve got it on the field. I think he got both feet down. Dave, I knew this audience would pull this off, right? Isn’t that a great story? Had you ever heard that one before?

CALLER: No, sir, and it was nice to hear. I’m gonna get back to cursing at my computer — and this was a use of my super nerd powers for good.

BUCK: Thank you for unleashing those nerdy powers, sir. We appreciate it here. That’s what I try to do on radio every day. Nerd powers! Thank you, sir. Oh man, look at that. Oh man, look at that! I thought Media Matters, “Buck Sexton thinks he’s so smart, he reads fake Reagan speech anecdote.” But apparently… What can I tell you? No big deal over here. Just getting it done for freedom in America.