In 1873, Charles M. Barnes opened a small book business from his home in Wheaton, Illinois. His son, William Barnes carried the torch forward and alongside Clifford Noble, they opened the very first Barnes & Noble bookstore on Fifth Avenue in New York City in 1917. The store began to flourish, garnishing it a reputation for excellence. Bookseller Leonard Riggio acquired Barnes & Noble in 1971 and merged it with his own bookselling enterprises. With 150,000 book titles, the Barnes & Noble Fifth Avenue store soon became known as “The World’s Largest Bookstore”. There was much expansion over the next two decades, and by 1987 a large acquisition saw 797 retail bookstores. (Barnes and Noble History).

Since that time we’ve seen the addition of digital sources, such as eBooks and audio books, and there are many who argue the benefit of these over traditional paper books. It’s easy to find articles highlighting the benefits of eBooks; including lower price, instant access, lower carbon foot print, portability and the fact that eBooks take up much less space than physical books.

However, it seems that even though many Americans do like to spread their book consumption across several different formats, they are by no means giving up on print books. According to a recent survey conducted by Pew Research Center (Jan 2022); “Despite growth in certain digital formats, it remains the case that relatively few Americans only consume digital books (which include audiobooks and e-books)”. 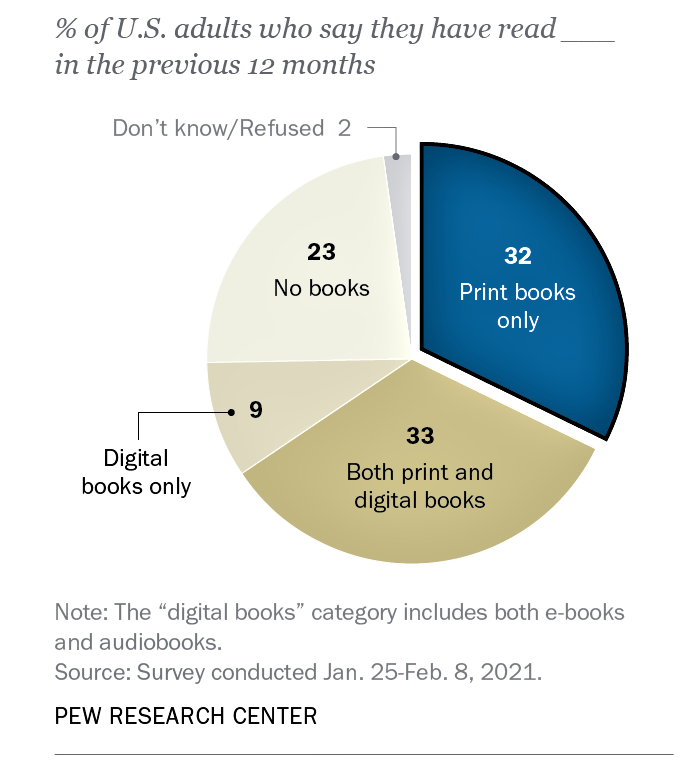 By embracing the digital trend, Barnes & Noble has expanded not only their catalog but also their traditional business model allowing them to still be relevant, and yet honor their long traditional roots. In October 2009, Barnes & Noble launched NOOK which is a space for searching and accessing, eBooks, eReaders, Accessories, Tablets, and eBook support. Digital formats are definitely reshaping the landscape of how we attain and consume literature.

According to The List (Aug 8 2022) Barnes & Noble foot traffic has shown a bit of decline in recently. “Before the COVID-19 pandemic, Barnes & Noble saw a monthly average of approximately 110,000 visitors, with a spike to nearly 200,000 during the holidays. As people were navigating safety precautions in the spring of 2020, foot traffic dropped to barely 20,000. The following summer, masked shoppers began to re-enter stores six feet apart and foot traffic rose to an average of 90,000 visitors each month. While Barnes & Noble has recovered from its 2020 slump, trends have not returned to their pre-pandemic averages. It seems that shoppers are now less likely to spend their days strolling through the fiction isolates.”

However, technology might not be to blame for the reduction in foot traffic. It may just be that people are simply not reading as much as they were over the last couple of years. According to a cbcnews survey conducted in December 2021, our reading habits changed during the lock down; “around two thirds of respondents said they had read more.” With many people feeling “zoomed-out” from a bit too much screen time and wanting to be social after too much alone time over the last couple of years, this decline in foot traffic makes as since as folks are keen to get back to living their lives. As such, with the world opening back up, especially this summer, people are turning off their screens, and setting down their books in order to get back to being engaged with living life, and being their own protagonist for a while.